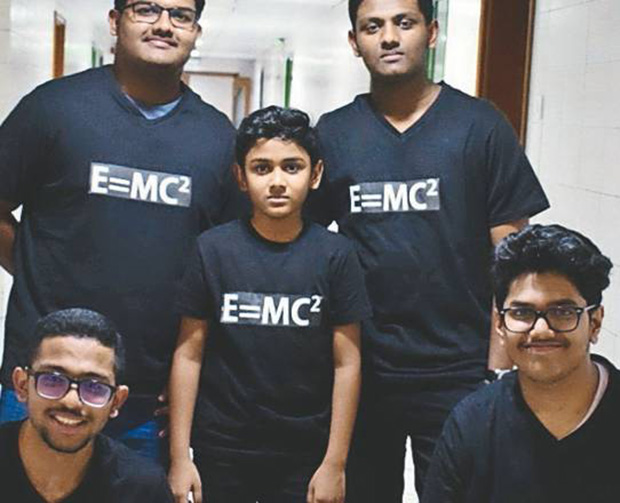 Bothered by the massage card trash they find in their neighbourhood every day, five schoolboys have designed a smart 'collector' machine, hoping to put an end to the problem.

Friends Rahul Arepaka, Atin Sakeer, Ethan Hadimani, Sanjay Pramod and Vaibhav Arepaka - all from Our Own High School Al Warqa'a - couldn't help but notice how people in their areas, Karama and Bur Dubai, complain about finding such lewd cards on their cars day in and day out.

Being robotics enthusiasts who have won a number of competitions, the boys decided to use their skills to help Dubai maintain its charm of being one of the neatest cities in the world.

They called their machine 'E=MC2', which stands for Earn Through Massage Card Collector.

Explaining how the machine works, team lead Rahul said: "E=MC2 allows people to throw massage cards into the machine and be rewarded with points in a loyalty programme."

If a person finds massage cards on his car, all he has to do is "deposit" them into the machine and scan a card, where points could be stored. The points can then be used to claim 'rewards', he said.

To make it work, the boys would then have to partner with authorities or organisations.

For an instance, they would need the help and approval of the RTA to instal the machines at parking lots. And for the card, they were thinking of using existing nol cards so that people can use their massage card points to pay for parking or transport services, Rahul explained.

The boys said sophisticated gear mechanics have been used to build the intelligent machine. It won't accept paper or any materials other than massage cards.

"It basically works like a vending machine which can check whether the note being fed into it is Dh5 or Dh10. We are using sensors and ML programming techniques to sort out the cards and count them precisely, eliminating the rest," said Atin, the lead programmer and engineer of the project.

"The machine takes into account the colours used, the dimensions, thickness, etc., to figure out if it is a massage card or any other card," he said.

It took the team a little over a month to construct and test E=MC2, and they said they have been getting good feedback from their folks.

"Now, since we are fully assured that our machine works well, we are ready to introduce it to the world. We are now planning to approach the Dubai Municipality and the RTA to put this project to good use. It is ready for use and once the RTA agrees on the nol-point system, we can instal the software on the machine," said Sanjay, another member of the team.

"Being compact and lightweight, E=MC2 can be set up even in the most remote corners of Dubai, making it accessible to a large number of the population.

"Also, with the attachment of solar panels on our machine, authorities wouldn't have to worry about power requirements and costs," said Ethan, assistant builder of the machine.
Essentially, the project rewards the public for making the extra effort to dispose of massage cards properly, instead of carelessly leaving them on streets.

"Our plan was to develop a mutually acceptable business model for our machine which will reward its users with nol card top-ups or discount offers, which they can avail of at various outlets," said Rahul.

"Since there are so many cards on the streets, our tentative plan was to offer public Dh 1 for 11-12 cards deposited in the machine, but if you place more than 20 in one attempt, it would start decreasing the cost. But it will all depend on the approvals and advice from the authorities," he added.

Giving credit to their supporters, the youngest team member, Vaibhav, 12, said: "We would like to thank our teachers for giving us precious lessons, our classmates, friends, and family for their support. And finally, we would also like to thank our sponsor, whose financial support helped us turn this project into reality."